Traveling on the Apulian Adriatic Coast, in a few km from Lecce city you’ll reach the marine area of Torre dell’Orso and the most famous Two Sisters Beach | ita: Spiaggia delle Due Sorelle.

Are you curious to know why that interesting name?

Well, there is a nice and a bit sad tale behind the Two Sisters Beach | ita: Spiaggia delle Due Sorelle. This gives to the location a huge air of mystery.

This marine area is very fascinating. Reachable walking through a little Mediterranean Maquis forest, under the cliffs there’s a sandy beach 800 meters long.

But probably you’re still thinking about the tale, so, I’m going to tell the story.

The tale of the Sisters

« The tale says that, once upon a time there were two young sisters, living the Salento area. They were very hard workers and they had never seen the magnificence of the sea.

One day, to counteract the hot summer, they went toward the seaside, for the first time. Well, they were so much fascinated of the amazing view they got there, that the younger one dived from the cliff into the water. At that point the other one dived in turn to save her sister, but it was too late.

They couldn’t get back to the shore. The Gods, looking at them, alone, desperate and lovely decided to turn them into two beautiful rocky stacks in the middle of the sea.

A fisherman while walking nearby just saw two rocks rise from the sea. As of that day the beach it’s known as Two Sisters Beach. »

The tale is very magical but a bit sad and once there it’s very hard to don’t get emotional.

Then, the clear sea water just completes the landscape. 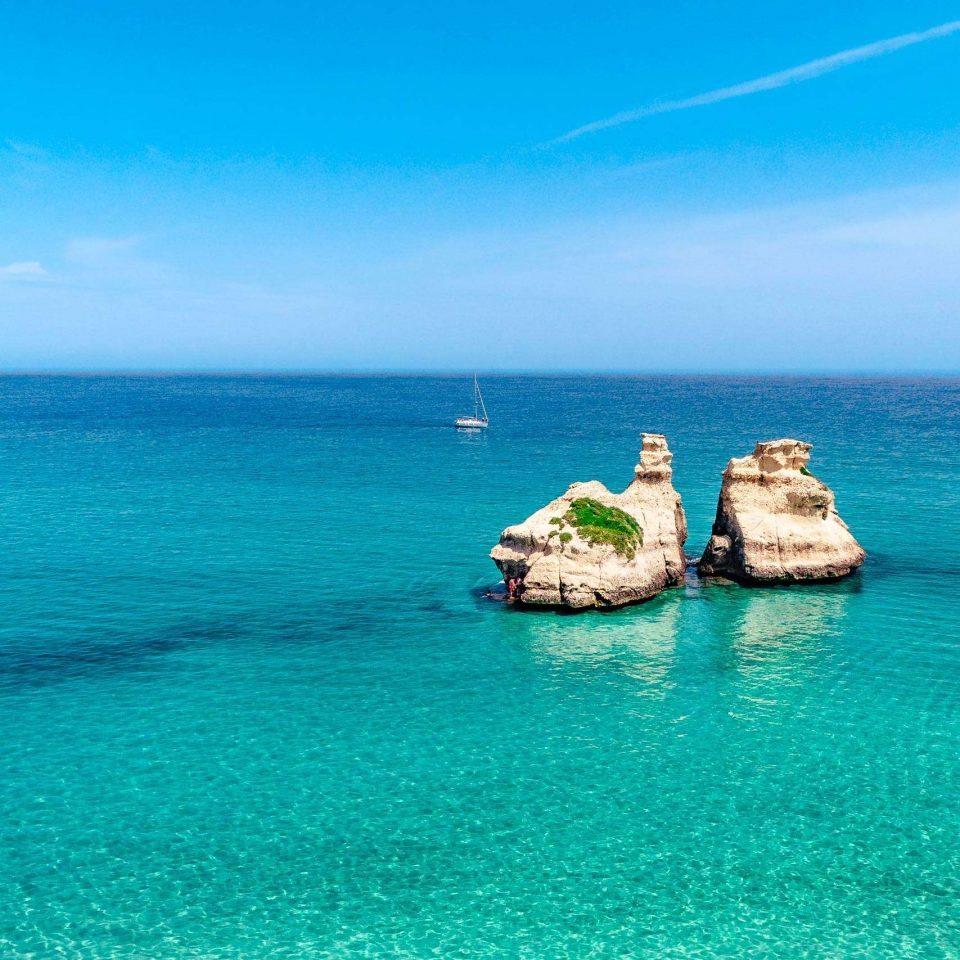 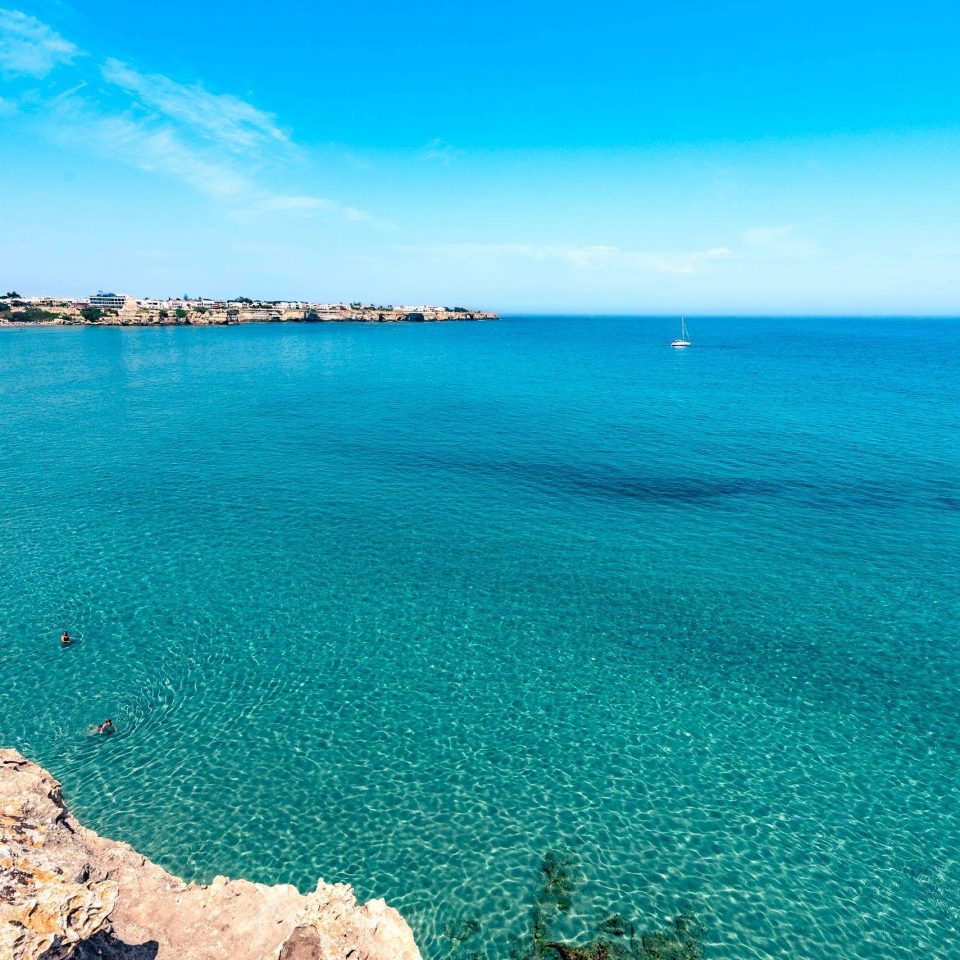 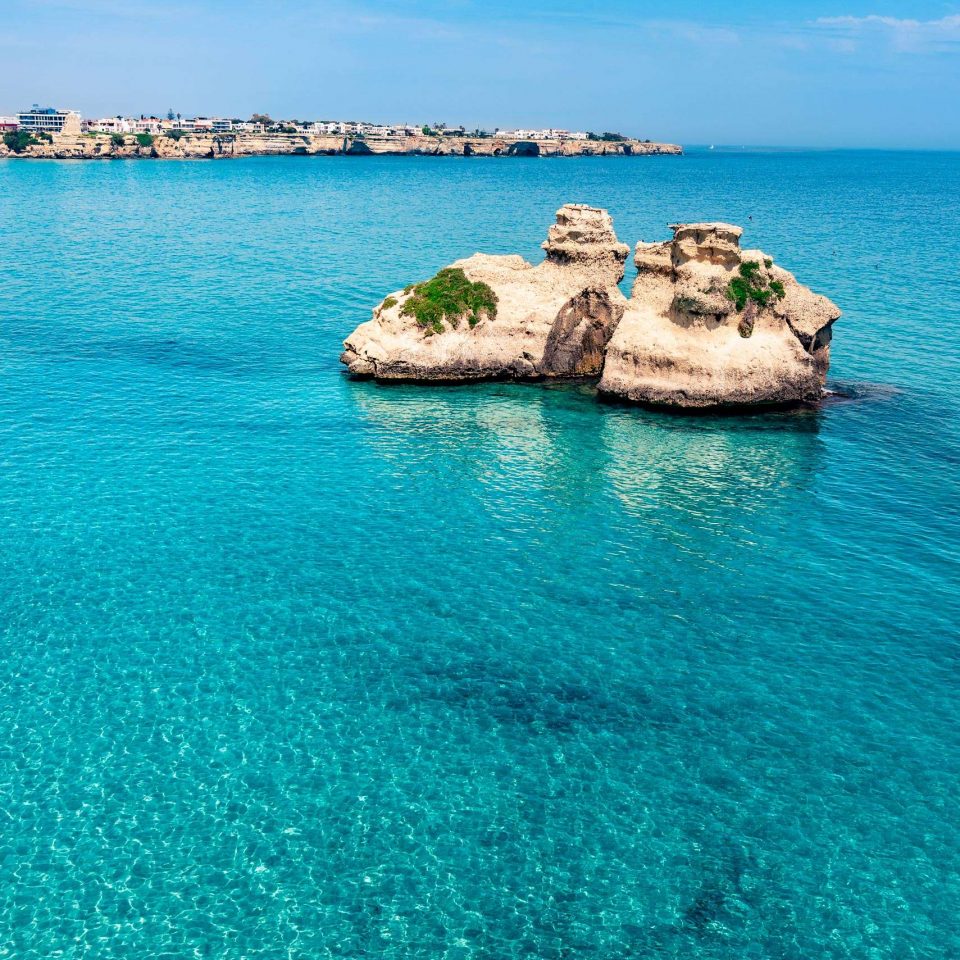 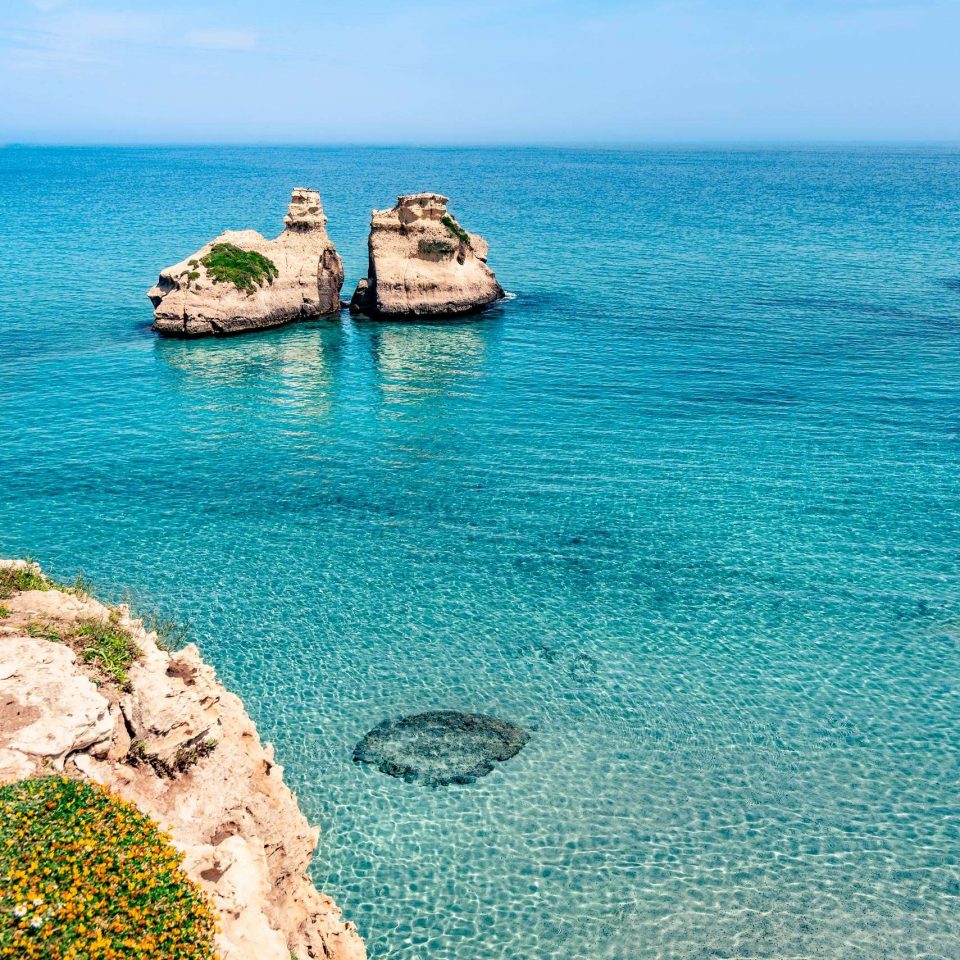 The Two Sisters Beach | ita: Spiaggia delle Due Sorelle | is located in the marine area of Melendugno, Torre dell’Orso. Also this name has got a little charming story.

In this case the name Torre dell’Orso, which literally means Bear Tower, derives from the sighting tower by the sea.

Then, on the cliff under the tower there’s a rock shaped as a bear by the erosion.

A one day trip on the southern Adriatic coast of Puglia

If you want to live a great and cool experience traveling on the Adriatic Coast start your trip having a breakfast in Lecce city.

Get a “pasticiotto” and a “caffè leccese” to begin your day.

Drive from Lecce to Roca Vecchia village, where the absolutely amazing Poetry Cave | ita: Grotta della Poesia | awaits you for a nice dive.

After that, run towards the Two Sisters Beach | ita: Spiaggia delle Due Sorelle | to get a relaxing swim into one of the most beautiful sea of Puglia.

But if you have still time, don’t miss the weird landscape of the Bauxite Cave | ita: Cava di Bauxite | quite close to Otranto town.

You can easily do this little itinerary in a one day trip. From the morning to the night on the southern Adriatic Coast of Puglia.

Watch the pics we shot at the Two Sisters Beach | ita: Spiaggia delle Due Sorelle | then, also visit the pages of the Poetry Cave | ita: Grotta della Poesia | and The Sea Stacks of Sant’Andrea | ita: I Faraglioni di Sant’Andrea |.

Click on the map below to directly get the direction by Google Maps.